Bright yellow neon lights in the form of a smiling face emanate from the window of the Paris storefront. A black bicycle vendor cart with the slogan Je suis joyeux  (I am joyous) is parked on rue Saint-Augustin at the entrance to Passage Choiseul. This sets the mood even before one gets close enough to read servi avec coeur (served with heart) painted on the facades. The young man announces,“Bienvenue au Café Joyeux!” with a welcoming grin as he politely opens the door. You will rejoice too from the moment you enter this coffee-shop with a difference. 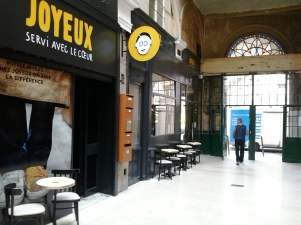 The decor at Café Joyeux is French vintage with lovely mosaic-tiled floors and stone walls. The freshly prepared food is a mix of classic French and California contemporary. Behind the glass display my favorite comfort foods, carrot cake and muffins, are placed next to croissants and financiers. The menu behind the counter indicates home-made light fare, including vegan and gluten-free options, to eat in or take away. What makes the difference is the service. The staff is entirely made up of individuals with intellectual and developmental disabilities such as Down’s syndrome and autism. 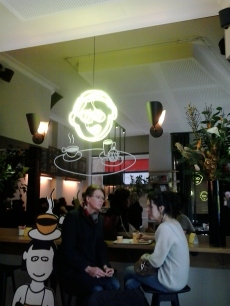 I chose the juice of the day while my friend ordered a cappuccino. The cheerful cashier handed me a lime green Duplo to place on our table. Shortly afterwards, the waiter carried a tray in our direction. He hesitated, looking around, until a reassuring voice prompted, “the green cube”. Matching the object on our table to the one on his tray he mindfully put our beverages in front of us. “Enjoy!” No sooner had the customers next to us left, when a young woman expertly wiped down the table. Like a well-rehearsed orchestra, each member of the staff played his role under the discreet supervision of Yann Bucaille, the owner.

“We still need a little fine tuning” Mr. Bucaille remarked as he chatted with customers who were among the first to arrive at Café Joyeux for the public opening that morning. On March 21, Down’s Syndrome Day the inauguration was held in the presence of first lady Brigitte Macron and Secretary of Handicap Sophie Cluzel, a longtime advocate for inclusion and mother to an adult with Trisomy 21. Nicolas Hulot, who is now Minister of Environment, and a handful of other celebrities also attended the pre-opening event to show their support.

Is this the only business to employ people with disabilities?

No, and it isn’t Mr Bucaille’s first. He opened the original Café Joyeux last December in Rennes (Brittany). It was a positive experience he hopes to replicate in other areas of France. The idea came when an autistic man applied for a job at his 5-star hotel Castelbrac in Dinard. After turning him down, he felt remorseful and wondered what he could do to make it work. Already a successful businessman Yann Bucaille became a social entrepreneur.

The fact is, however, that unemployment among the working age population with disabilities, especially youth, is unacceptably high. This is true worldwide. In France, President Macron declared disability rights a priority of his term. The French government’s revised plan for autism, promising more inclusion among other measures, was announced following World Autism Awareness Day.

My friend and I reminisced while sipping our beverages. We had met a little over 25 years ago while raising our autistic sons in Paris. Eventually, we each left France after our children were excluded from school to pursue their right to education. Much has changed for the better but there is still a long journey ahead. Initiatives like this café are a step in the right direction. We hope to see more. Watery eyed, we said our goodbyes as she was returning to San Diego and I was leaving for Chicago. They were tears of joy. 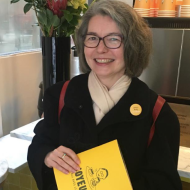 Disability rights and global politics aside, Café Joyeux is a great place to either indulge your sweet tooth or pick up a healthy lunch. Whichever you fancy, vive la différence!

Update! Since writing this article just after the opening, I am pleased to say that due to overwhelming success they opened an annex in the Passage Choiseul for carry-out orders and will soon open another in Bordeaux

1 thought on “Heart & Flour at the Café Joyeux”